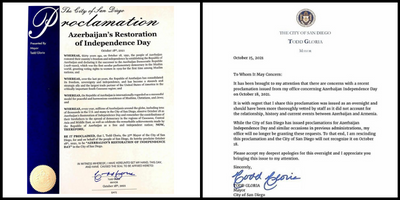 The San Diego Armenian American community took issue with the proclamation because it was an attempt at whitewashing the facts of Azerbaijan’s policy of intolerance, ethnic cleansing war crimes against the Armenian population of Artsakh, its systematic destruction of historic Armenian Christian churches, and attempting to erase the Armenian community’s presence on their ancestral lands.

We stand in full support of the Armenian American community of San Diego that gathers around the Diocese’s St. John Garabed Armenian Apostolic Church for objecting to the proclamation.