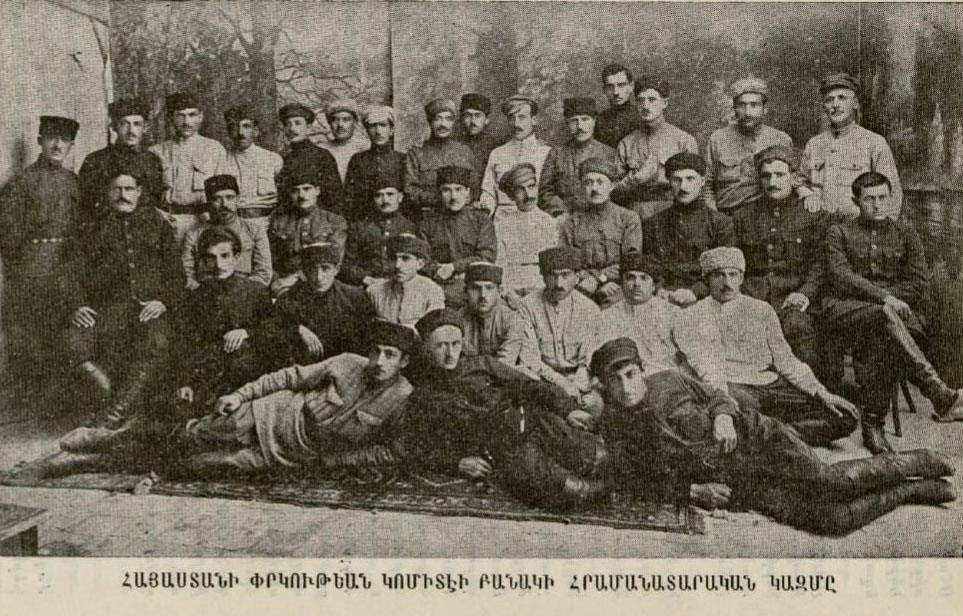 February 18 marks the anniversary of the 1921 February Uprising against the Soviet occupation of Armenia. This critically important time in our history is seldom commemorated, but it’s implications are felt to this very day and especially now as Azerbaijan continues its aggressive rhetoric toward Syunik.

On this occasion we are publishing a mini-documentary about what transpired 101 years ago (produced by Yerkir Media in Armenia) along with a summary article written in English for the Armenian Youth Federation’s Haytoug publication in 2010 by late AYF and ARF member Allen Yekikian:

RECALLING THE FIGHT FOR FREEDOM FROM SOVIET OCCUPATION

February 18 was the 89th anniversary of the 1921 February Uprising against the Soviet occupation of Armenia. Every year on that day, a memorial commemoration is held at the Khatchar in Yerevan dedicated to the Armenian leaders jailed and murdered by the Bolshevik Secret Police in the early months of that occupation.

Those murders and a series of brutally repressive policies spurred Armenia’s population to rise up against the Bolshevik regime that had overthrown its democratically elected government.

Having coordinating its invasion of Armenia with the Turkish assault on Kars, Russia had forced the republic’s government to dissolve and accept Soviet Rule or face certain annihilation by the Turkish army.

The republic’s last Prime Minister, Simon Vratzian, wrote about the revolt in his seminal work on the Republic of Armenia. A shorter essay on how Armenia was Sovietized was translated and published in the Armenian Review in 1948, Vratzian’s essay provided a first hand account of those turbulent days. Appointed to lead the uprising, he detailed the occupying regime’s brutal rule and how it led a deprived, destitute and demoralized population to rise up against their occupiers.

Immediately after coming to power, he wrote, the Bolshevik authority (the Revcom), under the chairmanship of Sarkis Gazian, organized a secrete police force (Cheka) and arrested or exiled Armenia’s top political, cultural, and military leadership. They launched endless searches and arrests throughout the country, confiscating property and wealth and jailing distinguished political and cultural leaders such as Levon Shant, Hovhaness Katchaznouni, Nigol Aghbalian and hundreds of others.

“The population’s last morsel of bread was being plucked and sent to Russia,” he wrote, noting how the Bolsheviks seized everything the small republic had, from homes, furniture, and clothing to basic foodstuffs, horses, cattle, chicken and eggs. Aside from jailing the country’s leadership and stealing its national wealth, the Revcom also set out on a systematic campaign to eradicate Armenian national identity, banning the Armenian Tricolor and the national anthem (Mer Hairenik), and going so far as to destroy historic documents and archives of the country’s first Republic.

Vratzian described the February Revolt as an outburst of popular sentiment against the Soviet occupation. The movement, he explained, saved countless lives that would have otherwise ended in the damp prisons of the Bolshevik Cheka or frozen abyss of Siberia. After the popular uprising, the ARF established a Committee for the Salvation of the Fatherland to regain control of the republic’s lost territories.

One such territory was the mountainous region of Zangezur in Southern Armenia, where General Garegin Njdeh had been fighting a guerilla war against the Red Army with his fedayee forces. At the time of Sovietization, the Armenian government had negotiated a deal to secure Zangezur’s inclusion in a future Soviet Armenian Republic. But Moscow and Turkey had colluded to award it to Soviet Azerbaijan in a bid to create a land corridor with Turkey through Karabakh and Nakhichevan.

The February Revolt changed all that. When the Soviet Army eventually reentered Armenia, Vratzian’s Salvation Committee made its last stand in the mountains of Zangezur with Njdeh’s volunteers. The Mountainous Republic of Armenia in Zangezur became a fortress on the flank, allowing the leaders of the February Revolt enough time and leverage to negotiate with Moscow for the inclusion of the region within the territory of the Sovietized Armenian republic.

The toppling of the Bolshevik regime in Armenia, although short-lived, sent shockwaves to Moscow and forced the Soviet central authorities to rethink their policies in Armenia. From that point forward, up to the 1960s, Moscow only appointed moderate Armenian communist leaders sympathetic to national interests. The new generation of Soviet Armenian leaders, men like Aleksandr Miasnikyan and Andon Kochinian, worked to preserve national heritage, as much as possible. Miasnikyan saved the remnants of independent Armenia’s archives, while Kochinian provided instrumental support for the building of the Sardarabad and Dzidzernagapert monuments in the 1960s.

The February Revolt also forced Moscow to make good on its initial promise to preserve the 1920 borders of the republic by including in them the region of Zangezur– without which Armenia would not have been large enough to qualify as a Soviet Republic. With no control over its territory, its population, like that of Nakhichevan, would have slowly been replaced by Azeri Turks.

If it was not for the February Revolt, the independence of Armenia and the liberation of Nagorno-Karabakh 70 years after Soviet occupation would surely never have come to fruition. And Armenia as a country would have disappeared in the annals of history forever.