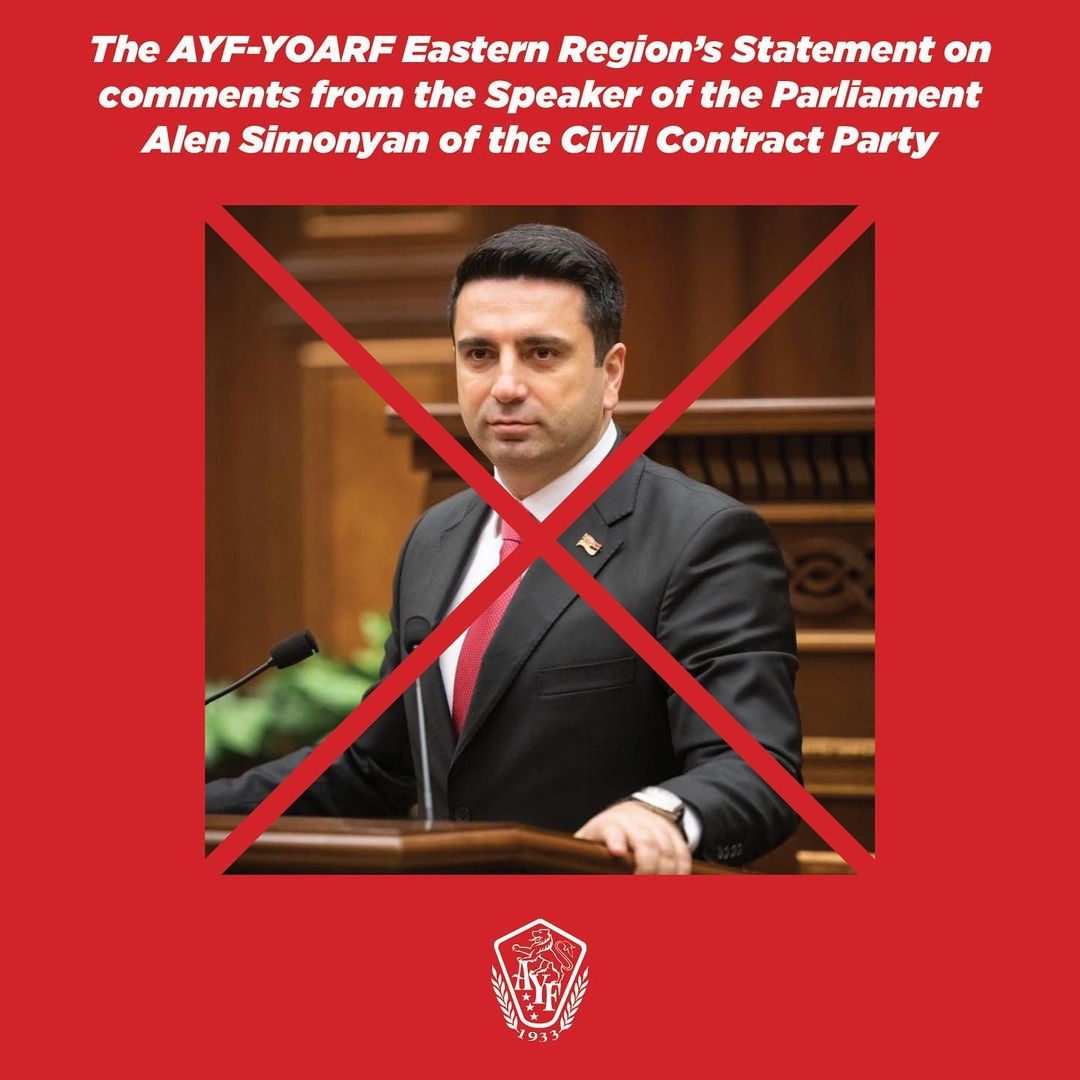 The AYF-YOARF Eastern Region staunchly disavows the treasonous betrayal of Armenian POWs by the Speaker of the Parliament Alen Simonyan of the Civil Contract Party through his disregard and attempted discrediting of the report of Ombudsman Arman Tatoyan.

Through a collection of testimonies and factual data, the Office of the Ombudsman of Armenia along with the Yerevan-based International and Comparative Law Center (ICLaw) and the Armenian Legal Center of Justice and Human Rights (ALC) compiled a detailed report on the torture and mistreatment of Armenian prisoners-of-war in Baku’s prison. This vital report was in the process of being submitted to international courts, a key tool in forcing the fascist Azerbaijani state to return our innocents, whose only crime was to protect their homeland.

And yet, rather than supporting our illegally kidnapped countrymen, the Pashinyan regime has turned its back on them. When opposition MP Mkrtchyan described the conditions of POWs, as stated in the report, President of the National Assembly, Alen Simonyan called them “fabricated scenes.” No, rather than being fabricated, the situation of the POWs is far more dire – let us not forget that at least 19 Armenian POWs (the majority of whom were civilians, rather than servicemen) were tortured and brutally murdered by Azerbaijan; the Armenian government, which must be the ultimate representative and advocate of these POWs, has attempted nothing to mitigate this horror in via actions or even public statements. In fact, the lack of action by this administration is a direct cause of the continued torture and abuse of Armenian POWs. This apathy, however, comes as no surprise, given that this same Pashinyan regime left fallen Armenian heroes in potato sacks, stacked haphazardly on top of each other in a small room for months after the end of the war.

This statement of Simonyan actively sabotages the process for the safe return of our POWs – how can we expect international and European courts to take our requests seriously when Armenia’s own government acts against the interest of its soldiers and military, while validating the disgusting propaganda of the fascist Aliyev regime?

Now, the treasonous Pashinyan dictatorship has yet again revealed its anti-Armenian, pro-Turkish bent. These POWs fought for their homeland, for the safety and liberty of the historic Armenian nation – what have they received in return? A government which does not endeavor in any way to return them to their families, and instead dismisses their suffering – whose only action concerning the hundreds of hostage POWs was to direct them to wait a few more months. Who now will defend the homeland upon seeing how the traitorous Civil Contract Party rewards them for their heroism?

Who stands to benefit from these actions: Turkey and Azerbaijan, whose fascist, anti-Armenian governments are being coddled and courted by the Pashinyan regime. Simonyan and Pashinyan are the ideological and historical successors of Armenians who sold out their fellow countrymen during the Genocide; the entire Civil Contract Party numbers among the traitors of Armenian history, who, for their own gain, have betrayed the Armenian nation and cause.

This junta of anti-Armenian traitors cannot be called a government; with a functioning government, one at least expects the active defense of our borders, the recognition of our own sovereignty and international advocacy for the rights and safety of our civilians.