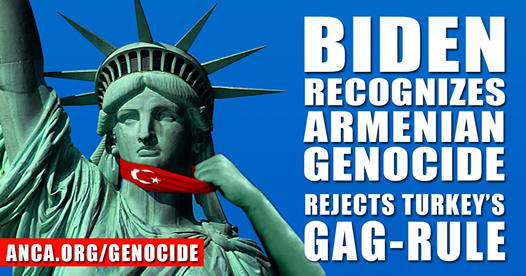 This colossal, international effort was always–and is–geared towards encouraging the world to take a just and moral stand vis a vis this great crime against humanity, and, by so doing, take the initial, first steps in securing the groundwork of justice for the crimes committed against the Armenian nation.

Therefore, while we convey our gratitude to President Biden, who at this critical juncture for Armenia, Artsakh, and all Armenians, has initiated the return of American policy towards notions of morality, truth and justice, we cannot ignore that this acknowledgement should never have been an object of speculation.

Unfortunately, what should have been realized naturally and with no effort–as it is a glaring truth—has, now, been achieved through decades of relentless sacrifice, constant vigilance, and hard work by countless Armenian Americans.

We particularly recognize, and extend our gratitude, to the Armenian National Committee of America–its activists, volunteers, and supporters–for leading the massive efforts to end the “Gag Rule” Turkey had placed upon US foreign policy, as well as other sectors of American political life, in this regard.

Simultaneously and sadly, however, the progress made on this front is now overshadowed by new genocidal aggressions and enormous losses set upon the Armenian nation, by Turkey and Azerbaijan, since September 27th, in both Armenia and Artsakh.

Throughout the so-called “44 Day War,” the genocidal acts and war crimes carried out by Turkey and Azerbaijan were widely and graphically documented across a large spectrum of media. And, what could have otherwise been prevented in full, or at least minimized with far less destruction to our Homeland and people–through pre-war, war-time, and post war actions by the Pashinyan administration–resulted in the colossal and unfathomable calamity we have all witnessed and through which our brothers and sisters in Armenia and Artsakh still suffer.

Now, nearly 6 months subsequent to Nikol Pashinyan’s signing of the disastrous, “Trilateral Armistice,” and as our shrinking Homeland remains severed from 75% of Artsakh lost; as our people continue to mourn the brutal murders of more than 5,000 young lives and 10,000 wounded; as our POWs continue to endure untold tortures in Azerbaijani captivity; and as the destruction of our religious and cultural sites in illegally occupied Artsakh continues unabated, the illegitimate Pashinyan regime, and its lackeys, continue their destructive rhetoric concerning one-sided normalization of relations and open borders with genocidal Azerbaijan and Turkey–essentially colluding with these criminal states to fulfill their century-long Pan-Turkic and anti-Armenian designs.

It is this very same path that has defended and propelled the Armenian Cause in the Diaspora.

It is this very same path that secured the liberation of Artsakh.

A bevy of global powers, whose special interests lay opposed to our own basic needs, have worked–and today work even harder–in their malicious attempts to force our people to deviate from the sacred path of recognizing and pursuing our own national and security interests.

Unfortunately these powers found and cultivated a lethal collaboration in the ignoble personage of Nikol Pashinyan and his repressive regime, who were able to manipulate segments of our long-suffering people to such a degree that some of our people began to see the regime’s destructive efforts against our education system as “educational reforms;” who began to see attempts at controlling and corrupting the judicial system as “democratic reforms;” and who began to see the usurping of the state budget as an “anti-corruption program.”

In recognizing and understanding the breadth of this vile undertaking still unfolding, let us all close ranks and come together, in the shadow of a genocide still ongoing, and truly unify to save what is left of our Homeland, so that we may begin rebuilding and to start regaining.

Let us unify in putting an end to an era of malevolent foreign influence in our internal affairs.
Let us unify in reinstating dignity and national pride among our people and nation.
Let us unify and thrive once again, and do so with our own hands, held together, as one.